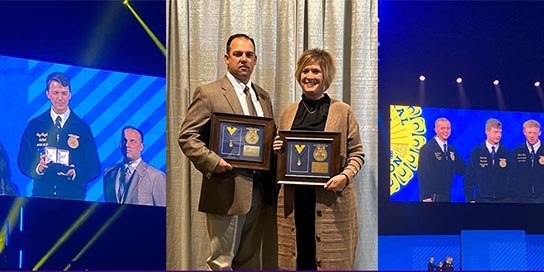 The Hydro-Eakly FFA had an exciting week in Indianapolis at the National FFA Convention.  After enjoying the keynote speaker at the opening session, Hydro-Eakly FFA President Cade Rea and Vice President Austin Smith accepted the award on behalf of the Hydro-Eakly FFA for being named a National 3-star Gold Emblem chapter.  3-star chapters represent the top 4% of chapters across the United States.  "This goes to validate the quality of students that are at Hydro-Eakly.  I am as proud of this award because it highlights the diversity and competitiveness of our students" says advisor Chris Klaassen.  At the next general session, national proficiency awards were announced and Hydro-Eakly had two national finalists.  Gage Slagell in Diversified Crop Production and Ryder Klaassen in Fiber and Oil Crop Production.  Gage Slagell won his proficiency making him the National Champion.  Later in that session, Hydro-Eakly FFA advisor Chris Klaassen and his wife Ginger Klaassen were awarded the Honorary American FFA Degree.  In the Friday evening general session Hydro-Eakly graduate Raegan Klaassen was a finalist for Star Farmer of America. Finally in the Saturday morning session, Hydro-Eakly graduates Garrett Slagell, Tayten Lierle, Raegan Klaassen, and Dylan Propps all received their American FFA Degrees.  The American Degree is the highest level that can be achieved in the FFA Organization.  "I am so very proud of all the competitors that were recognized at the 94th National FFA Convention and was especially excited for our four American Degree winners that have worked not only through their high school career, but even throughout their college career to continue to grow and develop their SAE.  This group has been a generational group that not many teachers get to have through their careers.  Gage Slagell was equally impressive in winning his proficiency and I was very proud of Raegan for having one of the top 4 programs in the United States" says Klaassen.  This week proved to be the cumulation of years of developing strong SAE programs and hours of work.  --Chris Klaassen